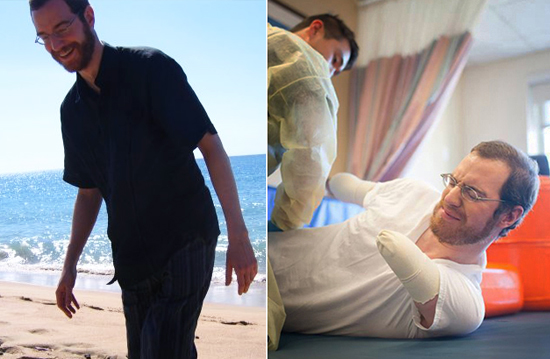 Left: Will on vacation. Photo courtesy of Will Lautzenheiser Right: Will at physical therapy six months after his amputations. Photo by Asia Kepka

Will Lautzenheiser was chasing the loves of his life. A year into a promising relationship, he landed a dream job teaching film at Montana State University. After his first two classes, Will visited the hospital for what he assumed was a painful muscle pull. He had no idea that pain was being caused by a life-threatening bacterial infection. When Will’s organs started shutting down, and his limbs began dying, doctors amputated his arms and legs to save his life.

Will’s world, as he knew it, would never be the same.

Taking an unconventional approach to therapy, Will begins to perform stand-up comedy, a creative outlet that helps Will cope with his losses.

As Will begins to accept his new life and adjust to profound challenges, news breaks about an experimental surgery that offers Will new hope to reclaim his independence. Putting his life and health on the line, Will risks it all to undergo a double-arm transplantation at the Brigham and Women’s Hospital in Boston.

Within this medical drama is a deeply personal story in which Will, with the support of his partner Angel, his family and a world-class medical team, redefines his identity and forges a new path. Filmed over four years, STUMPED explores themes of resilience, committed caregiving, and the life-changing potential of pioneering medicine.

Left: Will dressed up as a funky pirate. Photo by Asia Kepka. Right: Will hugs Angel at a press conference. Photo by Cydney Scott for BU Today.