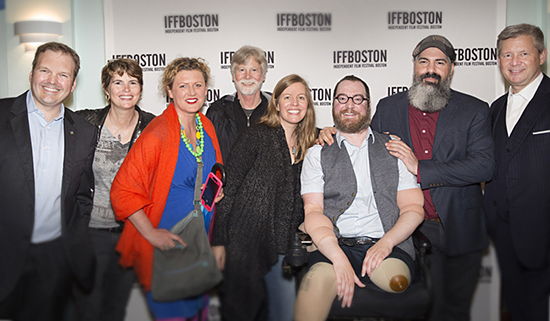 “There’s an incredibly beautiful b-story about devotion…
and it’s astonishing how much emotion is packed into STUMPED”
by Nick Johnston, Vanyaland 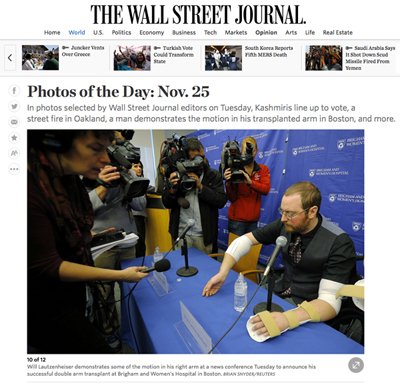 Wall Street Journal‘s “Photo of the Day” features Will Lautzenheiser at a press conference at the Brigham and Women’s Hospital. Photo by Brian Snyder, Reuters

“Cinema should be so lucky to see a film as upfront and accessible…The images Berghaus captures through her lens are images we can’t erase from our minds.”
by Andy Crump, Paste

“[STUMPED] is quite a narrative odyssey…Berghaus proves herself more than worthy of her subject, delivering an intimate cinematic portrait.”
by Christopher Llewellyn Reed, Hammer to Nail

Video Interview with Robin Berghaus during the Bentonville Film Festival
by Jeremy Turner, The Arkansas CW 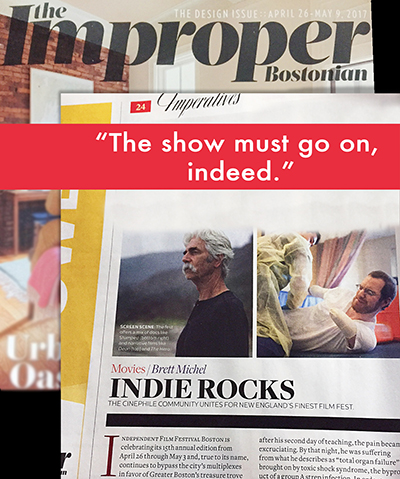 STUMPED featured in The Improper Bostonian

Interview with Will Lautzenheiser and Robin Berghaus
by Alison Bruzek and Meghna Chakrabarti, Radio Boston

“The show must go on, indeed.”
by Brett Michel, The Improper Bostonian

… STUMPED is both a celebration of its subject and a love letter to the city of Boston
by Evan Crean, NewEnglandFilm.com

“Comedy was cathartic…a gateway for Will to educate and engage audiences about what it’s like to live with severe disabilities.”
by Annie Zaleski, The Daily

“For me, this was 100 percent the right thing to do.”
by Amy Laskowski, BU Today

Interview with Robin Berghaus and Will Lautzenheiser
hosted by Jeff Stahl, KESQ 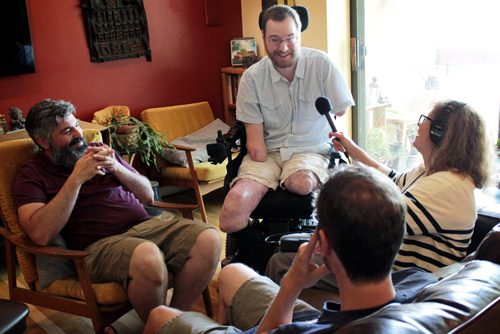 “[STUMPED] has a lot to say to people who are struggling.”
by Sherry Barkas, Desert Sun

Stories about Will Lautzenheiser and Brigham and Women’s Hospital

“Now, Will can turn a doorknob, feed himself, write with a pen and feel the rain on his hands.”
by Robin Young, National Public Radio’s Here & Now

“Your hands are engines of communication and intimacy…to have that restored for me has been amazing.”
by Karen Weintraub, STAT 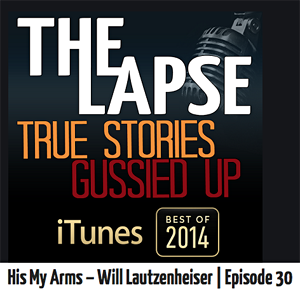 “I said, ‘no, this would never be a possibility for me. This is totally farfetched. Now it’s happened. It’s amazing.'”
by Liz Kowalczyk, The Boston Globe

“These are living, changing hands. We felt the pulse after surgery. The nails and hair are growing. It’s astonishing.'”
by Robin Young, National Public Radio’s Here & Now

“Flesh-eating bacteria. A loss of all four limbs. And then? That’s when Will’s story gets really wild.”
by Kyle Guest, The Lapse

“I’m pretty sure their humor helped keep me sane. Rehab turned out to be an ideal incubator for the show.”
by James Sullivan, The Boston Globe 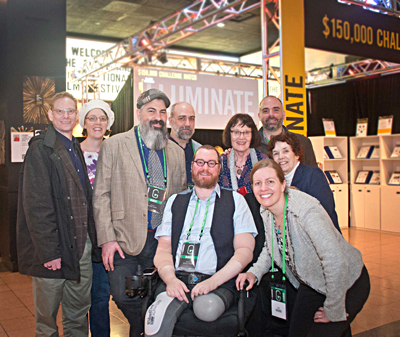 STUMPED team and friends at the Cleveland International Film Festival.

“The twins speak about the impact on both their lives and about how stand-up comedy has become a healing tool for Will.”
by Robin Young, National Public Radio’s Here & Now

“He’s looking forward to not just regaining function, but also helping to answer questions such as the long-term effects of anti-rejection drugs, which could aid future patients.”
by Alvin Powell, Harvard Gazette

“…he looks forward to holding niece and his partner, cooking, and resuming his film career.”
by Yasmeen Abutaleb, The Boston Globe